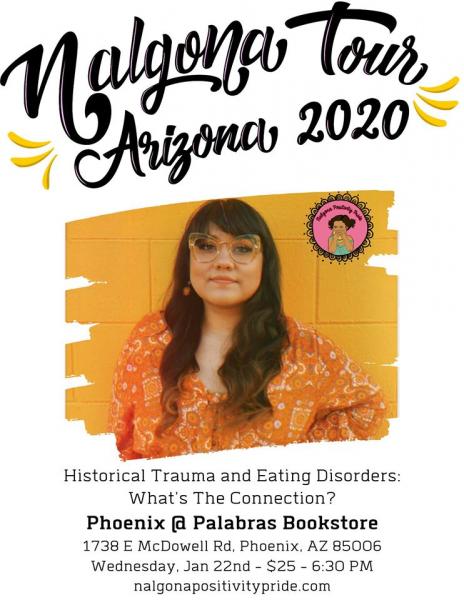 For the past 30 years, eating disorders have been represented as a white, middle-class phenomenon. Due to the lack of representation of people of color and indigenous populations with troubled eating have suffered from high rates of undiagnosed conditions, inaccessible treatment, and culturally insensitive practices. In this presentation, participants will have the ability to evaluate eating disorders through a social justice lens that centers the experiences of people of color and indigenous descent people. Participants will learn about historical trauma, and the legacies of colonialism on self-esteem, body-image, and food.

Nalgona Positivity Pride (NPP) is a Xicana-indigenous body-positive organization that provides intersectional eating disorders education and community-based support for people of color who are struggling with troubled eating and poor body-image. After not seeing her own experiences reflected and the lack of cultural awareness in the eating disorder world, Gloria Lucas started NPP in 2014 out of an urgent need to create a platform for communities of color and indigenous-descent communities who struggle alone. Gloria first-hand experienced the isolation that comes with being a person of color with an eating disorder and the absence of services for low-income people.

NPP’s line of work focuses on uncovering the impacts of colonialism, social oppression, historical trauma and its role in impairing relationships indigenous-descent people have with food and body-image. NPP’s goal is to help people of color and indigenous descent folks find education and resources for self-empowering, resistance, and healing.

to register please go to https://www.nalgonapositivitypride.com/

In addition NPP has:

been featured in NPR, Bitch Magazine, Oprah Magazine, Los Angeles Times, Huffington Post, and Teen Vogue.
spoken in multiple national conferences including The Binge Eating Disorder Association Conference, National Eating Disorders Association, & The Fat Activism Conference
lectured internationally and has spoken at The University of California, Santa Cruz, The University of Texas at San Antonio, School of Social Work University of Michigan, and the University of California, Los Angeles
over 100k social media followers
collaborated with The Body is Not An Apology, Association for Size Diversity and Health (ASDAH), National Eating Disorders Association (NEDA,) and Trans-Folx Fighting Eating Disorders (T-Ffed).
Finally, NPP lectures, hosts events, offers business consultation, hosts support groups, and creates social media content as a way to reach out to and empowers the individuals whose bodies are systematically at the margins of white/ mainstream ‘body positivity’ movements.

Gloria Lucas is a Xicana womxn from Southern California and the founder of Nalgona Positivity Pride. Straight from the Inland Empire, the DIY punk community in Riverside taught her to organize and since the age of 18 she has helped create Ladyfest IE, IE Riot Grrrls, and Women of Color for Decolonization. Gloria has a background in sexual health education, HIV/AIDS services, and trauma & substance abuse services for women and transgender folks. In 2014, she founded Nalgona Positivity Pride from years of dealing with the lack of women of color representation in the eating disorder awareness community. Like the womxn of color that came before, she creates spaces for marginalized folks to support each other and heal from the trauma of colonialism, Eurocentric beauty ideals, and disordered eating in communities of color. Gloria’s work has been featured at the Huffington Post, MiTú , Bitch Magazine, and The Body is not an Apology. She lives in Santa Ana and enjoys watching videos of chubby cats.

NPP will have merch for sale and preferably accepts cash.

Event is open to all. Presentation content is for a mature audience.

There are no products in your shopping cart.